0
Heathrow airport is vast; it is not only the largest airport in the UK it is one of the biggest in the world. The terminals and shopping malls are constantly filled with thousands of people who travel to and from the airport every day. In such a busy and lively place you could be forgiven for not noticing some of the people there who are not quite as substantial as the majority of the travelers, the people who are there in spirit are not in body. Heathrow has the reputation of being the most haunted airport in the UK, but just who are these spirits that wander the concourses and aprons on a daily basis? The next time you see someone who looks a little out of place, try and get a really good look at them, their clothes may be dated, their faces may be grey and as soon as you catch their eye they may just disappear into the background as if they were never there at all.

Dick Turpin
Possibly the most famous highwayman ever to have been tried and executed in Britain, he robbed from those who had plenty in order to keep his pockets lined with gold. Turpin and his gang were notorious thieves, murderers and bandits focussed on self gain. When he was finally caught he was sentenced to the gallows and is reputed to have stood there smiling as the noose was placed around his neck. 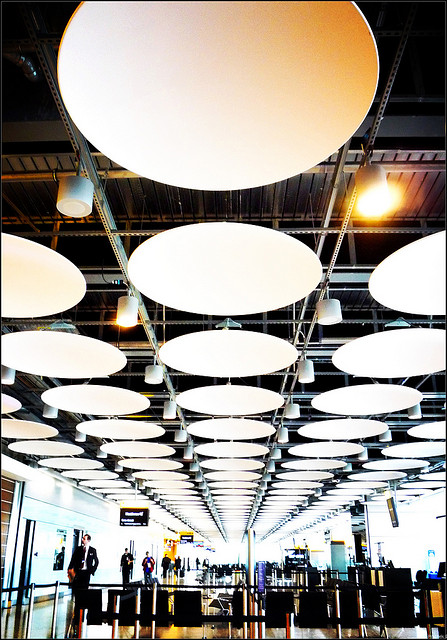 Now you are probably wondering why he would choose to be inside an international airport. As a highwayman, an opportunist, he was always on the move travelling around the country. Nothing much has changed in the years since he passed. Witnesses have reported sighting Turpin on the roads around the airport and staff have reported feeling the breath of someone standing behind them on their neck, followed by the sound of barking dogs. Sightings of Turpin are reported up and down the country, so why not at a place where travelers would congregate and provide easy pickings for a man of opportunity?

Air Crash Victims
In 1948 a Belgian aircraft crashed whilst attempting to make a landing in heavy fog, tragically all lives were lost. Despite the chances of finding anyone alive the emergency services fought their way into the wreckage to look for survivors. As they were clearing through the debris a man walked up to them and asked them if they had managed to find his briefcase, the startled emergency workers then looked on as the man’s face faded away and was lost to the smoke and fog of the scene.

They later discovered the body of a man in the wreckage who matched the description of the apparition that the rescue crew has reported. The man, dressed in a grey suit is occasionally sighted in one of the VIP lounges and occasionally along the runway, searching for his lost briefcase. Visitors to the airport have also reported seeing ghostly grey legs by some of the benches with no body attached to them.

Are you looking to find out more about London? Book a chauffer in London now only at Ultimate Chauffeurs.

Rizwan Ahmad
About the Author:
This article is posted by Rizwan Ahmad Author and founder of myfoodforu blog He is a blogger from India and he loves to share his thoughts by writing articles on  the different topics related to humanity,

What is Golden Triangle Tour India Famous for?

Electric Knives – Why And How To Use Them

Common Household Health Hazards and How to Avoid Them

All Around Fitness: Sports You Can Play for a Lifetime